From the corner of her eye, Chloe noticed the man watching from the VIP balcony table. Rolling a martini olive suggestively around her mouth, she trailed her tongue along her sensuously full lips before finally eating the olive. The restaurant was buzzing, the clientele among the elite, but the man only had eyes for her.

Smiling slowly, she crossed endless legs that merged into a tight cream shirtdress that revealed enough shapely thigh to keep the man’s attention fixed on her rather than his guests Dark and dangerous with piercing blue eyes, he had mimicked her tease with his own martini olive before slightly raising his glass in a toast.

Chloe gracefully slid off the barstool and sauntered across the restaurant. A smoldering mixed-blood brunette, she felt eyes follow the voluptuous sway of her body. Casting a quick glance toward the man, she caught his eyes before stepping through the doors.

She had barely crossed the street in the busy French Quarter neighborhood when she heard the increasing cadence of approaching footsteps shadowing hers. Chloe slowed and stepped into a dimly lit alley allowing a view of the street. Moments later, the man appeared. Stepping into a pool of light, Chloe faced him and slowly began unbuttoning her dress until she exposed a lacy red bra cupping her voluptuous breasts.

The man uttered a feral cry and pushed her against the wall, his rigid cock pressing urgently against her. The contact was electric as their hands and mouths aggressively explored each other. Suddenly, Chloe pushed the man away and slapped his face. As he touched his cheek, Chloe hiked up her skirt to reveal an invitingly smooth, plump, and very naked pussy peeking from crotchless pantyhose.

“Do you want to fuck me?” she asked, spreading her engorged lips far enough to expose her swollen clit.

The man nodded, but when he tried to reach for her, Chloe raised her leg and poised her five-inch stiletto heel toward his cock.

“Then you’re going to have to let me fuck you first.”

Stumbling toward the silk-draped bed in a frenzied dance of discarded clothing, hungry hands and mouths, Chloe felt the aching heat in her pussy spread to every sensitized inch of her naked body. The man devoured her breasts as they fell entangled onto the bed, but when she felt his thick, pulsing cock probe between the satin flesh of her thighs, she pushed him away and quickly straddled him.

His blue eyes bore into her as she poised herself above his cock and slowly teased the head with her sticky wetness. His body was tight and firm, and the tension she felt in his muscles was like a coiled spring. When he started to speak, Chloe placed her fingers on her lips.

“I’m going to fuck you so hard you’ll beg me to stop,” she said. “Then, and only then, you can fuck me any way you want.”

Seeing the yearning in the man’s eyes, Chloe smiled and slid off of him. He had assumed he was in control, but tonight he would learn the true meaning of the word.

“Get on your hands and knees.”

He hesitated only a moment before he complied, his movements sinuous. Chloe gazed at his taut ass and the delicious sight of his dangling cock and pendulous balls. 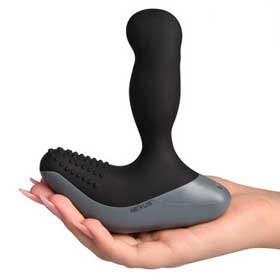 Gripping his cheeks, he opened his crack. Chloe regarding his twitching hole before reaching for something beneath the pillows. A mind-blowing combination of a black silicon prostate and curved perineum massager, the sleek Nexus Revo was one of many in her arsenal. She was about to retrieve a bottle of lube when she noticed the man trying to turn his head.

Chloe raised her free hand and planted a few smart smacks on each cheek until his flesh glowed pink. He winced but remained silent.

“Do you want it?” she asked, pressing the bulbous tip into his hole. “Do you want to feel it deep in your ass?”

Chloe thrust the Nexus Revo massager deep into his hole while simultaneously switching on the rotating head. The man bucked and moaned as she drove in the full length and clamped the vibrating base against his perineum. He was tight, and Chloe felt the resonance of the vibration in her hands that coursed through her body and aroused her to the point of pain.

She wanted it badly, but first the man needed to be taught the lesson that they all eventually learned … to fully submit to her before she would submit to him. There were other toys he could use on her for as long as his stamina, and his cock, held up.

Reaching down with one hand, she began to furiously finger herself, her aching pussy gushing with juice. Thrusting the massager into the man with one hand and working herself off with the other, it took Chloe only a few moments of rubbing her tender clit to elicit an orgasm so intense she thought she would faint from the spasms wracking her body.

The man looked into her eyes before brushing his lips against her ear.