I never thought of myself as a sexy woman. I knew I wasn’t ugly, but sexy? That just didn’t seem to sum up who I was.

She said from the first time she saw me walk into the office she could tell I was a bombshell. That’s why she wanted to help me with the makeover. She wanted me to see what she saw.

Her bedroom was sensual. Deep red walls with scatterings of Asian art, candles and rich textured artwork. It even smelled sexy. Not flowery, but not musky….just rich and sexy.

“You have luxurious skin.” Giselle quietly said. “It’s like porcelain and it feels so smooth.”

“Who am I trying to invite?” I asked.

“Someone. Anyone. Hell, invite me!”

“Yeah! Why not? If you’re going to be sexy you may as well use it! Hey, did you use the Lelo balls?” 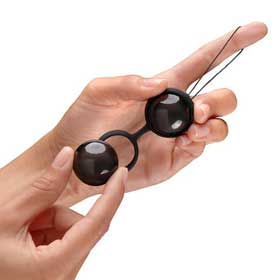 Oh right! The Lelo balls! She had borrowed them to me the week before. They came in a fantastic black box and were so smooth and inviting. I couldn’t wait to try them out! I still remember the sensation of slipping one of them into my vagina and immediately feeling the cool metal against the inside of my body.

That was the day that Giselle invited me over for a sexy makeover. Maybe she sensed a change in me.

“Were they as good as I told you?”

“Why are you blushing? What aren’t you telling me?”

Timidly I tell her, “I used them at work.”

“No way! You are way naughtier than you let on.” And then she leaned in and kissed me. Just puckered right up and laid a sensual kiss right on my lips. I was shocked but not angry.

“Must be the red lipstick. Plus, I think you liked it. Am I right?”

She was and I shook my head in agreement.

Giselle leaned into me and I felt her hand brush against my breasts. Instantly my nipples went erect and I sighed.

She breathed heavy into my ear and started to nibble on my earlobe. All I could do was close my eyes. Was this really happening? Was I being seduced by a woman?

I felt her crotch rub against my knee and in reaction I grabbed her tight ass. I felt her grind her hot pussy against my leg while I sunk my nails into her flesh.

Giselle’s breathing was getting hotter and faster. She was completely turned on by me!

We started kissing again – hard and passionate. She tore at my flimsy t-shirt and I went up under hers and awkwardly unbuttoned her bra. I stroked her small breasts and played with her nipples until they were rock hard.

My panties were soaked and I could only imagine hers were the same. Giselle stood up and I could see the outline of her tits behind her thin white t-shirt.

“Let’s move to the bed.” She said. I quickly obliged. “Make sure to take off your panties. You don’t need those anymore.”

I did as I was told and out of the corner of my eye I could see Giselle was working on something. When she turned around I saw it. A fantastic strap-on.

“Where are the Lelo balls?” Giselle asked.

She walked over and took out the black box, removed the balls and knelt in front of my spread legs. She reached down and gently inserted a ball.

“If you thought wearing these to work was fun, you’re in for a real treat.”

Giselle stroked her strap-on cock with lube and the image of her jerking it was enough to drive me mad. Her tiny tits peeking out from under her shirt and her perfectly painted nails stroking her cock was an image I wanted to remember forever.

Then she was over me, slowly inserting the tip of the massive dick into my pussy. The sensation of the fake penis pumping into me, rubbing against the sex toy inside me sent me into ecstasy. All I wanted to do was fuck her back – hard and ferociously.

Giselle reached up and pushed me off of her. I found myself laying on my back and she quickly planted her head in my crotch. She licked wildly at my cunt. Sucking and licking every inch of me. Just the sound of her lapping up my juices was driving me crazy.

“I want to eat you out. Take off that strap-on and sit on my face.” I told her.

I reached down and started to play with my own clit. Rubbing it harder and harder the closer I thought Giselle was getting to climaxing.

“Bend over the side of the bed, Giselle.”

“Well, well, well. Not so innocent anymore are we?”

“I think we are WAY past innocent right now. Some might say you’re my new bitch.”

A smile crept across her face. She stepped off the bed and bent over with her ass presented to me. “Well then. I guess I should take the position.”

Now I was stroking the fake cock and inserting it into her pussy. It felt so powerful to fuck her. It wasn’t a real cock but it was real enough. It was like I could feel the inside of her and that made me want to fuck her faster. I reached around with my left hand and grabbed her small, perfect tit. I liked the fingers on my right hand and reached down and started rubbing her clit.

Giselle let out the loudest scream when she came. It was exhilarating. I pushed against her clit and held it to make her orgasm extend.

I fucked a woman and it was at that moment that I felt like a real woman.