Standing naked by the penthouse window, Francesca gazed at the stunning city view. The velvety night was embraced by glittering lights that vied with the stars, the softly backlit room the perfect canvas for her body. While she admired the view, she knew that the view admired her, and with every caress of her tapered fingers against her silken tawny flesh, she felt the heat of a hundred eyes devouring her body.

Lean and curvaceous, her full breasts peeking beneath a thick swathe of long chestnut hair, Francesca tweaked her nipples and roamed the hills and valleys of her body until they culminated at the smooth, shaven delta of her pussy. Her breath quickened, and tossing her head back, she closed her eyes as her fingers sought her engorged clit and began to slowly, sensuously rub it in lazy circles. Slick juice coated her fingers, her pussy quivering with anticipation. Francesca felt her heat, smelled the ripe musk of her sex.

“Fuck!” she cried, the vibrator’s buzzing head poised and ready for action at her swollen lips.

Rising to her feet, Francesca grabbed the phone. “I thought I left instructions not to be disturbed!” she snapped without even checking the caller’s identity.

“Ms. Baron,” a calm, masculine voice replied, “the jet is waiting. Shall I have Franklin bring down your luggage?” 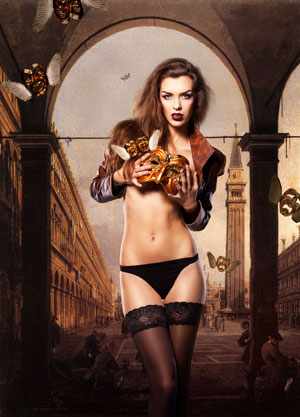 Standing on her hotel balcony, Francesca gazed at the bustling soul of Venice below her. No matter where she looked the buzz of the famous Carnival assailed her senses with music, laugher, the irresistible aroma of food, and more than a hint of the carnal desires lurking beneath a fantastic array of mythical costumes and stunning masks. The trip had been a last-minute whim, the thought of following her jet-setting clique on yet another yacht cruise or debauched stint at some unpronounceable exotic island filling her with boredom.

Naked beneath an exquisite gold and seed pearl gown worthy of Lucrezia Borgia, her upswept hair dripping with strategically placed ringlets, Francesca slipped on an exquisite gold brocade mask trimmed with diamante speckled feathers. Feeling the growing heat in her freshly shaven pussy, she ached to feel something fill and stretch her hole to the hilt. She had already sensed the scrutiny of many passing by the hotel and lingering at the bridge of a nearby canal, but the moment she turned her masked face to meet those gazes, something shifted, and she could literally smell the sexually charged air.

A breeze scented ripely from the canal rustled Francesca’s hair as she restlessly paced across the balcony. Her eyes swept the faces of her anonymous admirers … until they settled on the tall, muscular figure of a man boldly watching from the bustling square across the way. He stood in the shadow of a statue, his gold-threaded costume complementing hers.

Their eyes held each other, and even as she watched, his gloved hand moved to reveal the outline of his rigid cock before he started slowly stroking it. Francesca smiled and unbuttoned the bodice of her gown, exposing her full breasts and stroking her caramel nipples until they protruded like buttons.

Mesmerized, the man stroked his cock more vigorously as Francesca pulled up her gown to reveal her naked pussy. It didn’t matter who might see. The only thing that mattered was the sensation of her fingers tracing patterns along her swollen lips begging for a good, hard fuck. She was more than wet, her juice literally gushed onto her questing fingers.

Francesca smiled, paused to catch her breath, and went to answer.